Accutane: Receiving the Clear, Acne-Free Skin You Dream About

Accutane is simply a form of vitamin A. It is used to help treat acne and other related issues of the skin. This works by reducing how much oil the glands will release to the skin. This gives the skin time to renew and feel better.

Your skin doctor could give a prescription for Accutane to help with nodular acne. Since it is so strong, patients will often need to try other antibiotics and medicines to see if they work. If those other options fail, then the patient may be eligible for this kind of medication.

Studies have shown that Accutane could potentially cause severe birth defects in unborn children. Due to this, you should never take this medication when you are pregnant or plan to become pregnant.

All women who could potentially become pregnant must use two forms of birth control. They will need to take regular pregnancy tests during the treatment too.

It is also good to avoid any vitamin supplements that have vitamin A in them at the same time to avoid taking too much of the nutrient. It is best to avoid donating blood during the treatment and for a minimum of 30 days after the treatment ends.

Side Effects of Accutane

Accutane is generally considered safe to take when avoiding or treating acne, as long as the woman is not pregnant. There are a few side effects that all patients need to look for ahead of time.

Seek out emergency help if you develop an allergic reaction to the medication including difficulty breathing and hives. Stop using the medication and call your doctor if you have other issues including sleep problems, depression, numbness and weakness, issues with headaches and vision, severe pain, fever and chills, and loss of appetite.

Your doctor will be able to discuss the different side effects and what you should watch out for. If anything unusual shows up, it is best to discuss this with your doctor as soon as possible.

Will Other Drugs Affect Accutane?

There are a few other drugs that can interact with the Accutane and make it less effective or could make the side effects of the other medication more severe.

You need to let your doctor know if you are taking steroids, certain types of antibiotics, and some seizure medications. If there are any other medications you take, it is a good idea to discuss these with your doctor too.

How Should I Take Accutane?

Your doctor will give you instructions on how to take Accutane. Only take the amount they recommend for the amount of time they tell you. Each prescription of Accutane needs to be filled within 7 days of when your doctor prescribed it to you. You will only get 1 month of the medication at a time as well.

You must go back for checkups each time to see how the results are and to decide how much longer it is needed.

When taking your pill of Accutane, take it with a full glass of water. This helps make sure the Accutane does not get stuck in your throat. It is not a good idea to suck or chew on the capsule. Instead, swallow it right away. Take right before a meal to avoid irritating the stomach at the same time.

Your doctor will come up with a plan with you to help cure the acne. You need to take the medication for this entire time. It is not uncommon for the acne to get worse in the beginning, but it will improve. At each appointment, your doctor will look at how it is doing, test your blood for harmful effects, and sometimes test liver function to make sure you are healthy.

The Yakovlev Yak-52 (Russian: Яковлев Як-52) is a Soviet primary trainer aircraft which first flew in 1976. It was produced in Romania from 1977 to 1998 by Aerostar, as Iak-52, which gained manufacturing rights under agreement within the former COMECON socialist trade organisation[1]. The Yak-52 was designed as an aerobatic trainer for students in the Soviet DOSAAF training organisation, which trained civilian sport pilots and military pilots.

A descendant of the single-seat competition aerobatic Yakovlev Yak-50, the all-metal Yak-52 is powered by a 268 kW (360 hp) Vedeneyev M14P nine-cylinder radial engine. Our aircraft have all been lightened and have the upgraded M14PF 298 kW (400 hp) engine and have been fitted with a three-blade propeller.

Since the aircraft was designed to serve as a military trainer, the development of the aircraft incorporates a number of features to be found on the early postwar fighters: notably the cockpit tandem layout (instrument panel, seat design, cockpit opening system), tail design, tricycle landing gear, fuselage mixed construction (monocoque with steel tube construction), inner flaps, controls position, access panels on sides of the fuselage, even the location of the radio antena and overall dimensions of the airplane, which extensively match the Yakovlev Yak-17 UTI jet fighter trainer (NATO code name Magnet).

The aircraft has inverted fuel and oil systems permitting inverted flight for as long as two minutes.

At 998 kg (2,200 lb) empty weight, the Yak-52 is responsive and very capable as an aerobatic aircraft. Yet it is also easy to fly and land. It has been used in international aerobatic competition up to the Advanced level. It is stressed to +7 and –5 Gs, rolls (to the right) at 180 degrees/second and is capable of every manoeuvre in the Aresti catalog.

The Yak-52, like most Soviet military aircraft, was designed to operate in rugged environments with minimal maintenance. One of its key features, unusual in western aircraft, is its extensive pneumatic system. Engine starting, landing gear, flaps, and wheel brakes are all pneumatically actuated. Spherical storage bottles for air, replenished by an engine driven compressor, are situated behind the rear cockpit and contents displayed on the instrument panels. The operating pressure is between 10 and 50 bars (145 and 725 psi) and an emergency circuit is reserved for lowering the undercarriage if the normal supply is exhausted or the compressor fails. Additionally both main and reserve bottles can be charged from a port on the ground with compressed air, usually from a Scuba type air bottle. The ground steering/braking arrangement, especially, takes some adjustment for flyers accustomed to hydraulics, because the aircraft uses differential braking controlled by rudder pedals and a hand operated lever on the control stick.

The tricycle landing gear is retractable, but it remains partially exposed in the retracted position, affording both a useful level of drag in down manoeuvres and a measure of protection should the aircraft be forced to land “wheels up.”

Our Yak 52 Conversion course consists of a minimum of 5 block hours and costs £2112. It includes ground school on the basic systems, all landing fees, helmet, parachute, flying suit and tea/coffee for the duration of the course.

The course consists of:

-Walkaround teach including how to refill the air, oil, pulling through

The course can be completed as part of our AOPA Aerobatic Course which is 10 block hours. A lot of the above is covered in the aerobatic course and circuits would be included too. The AOPA Aerobatics Course costs £4230 and any additional training after to reach solo standard would be charged at £420 an hour. Please note we cannot guarantee any student will meet the standards required in the times quoted, what we can guarantee is quality instruction and facilities to aid learning.

This course is designed for those who have completed the 5 hour Yak 52 Conversion course, those who own their own Yak or those pilots who just want to improve their basic handling skills and become a safer pilot.

The course consists of 3 hours ground school covering upset prevention, stall and spin theory followed by 2hours of briefings and debriefings and 3 block hours of flying.

-Advanced stalling (accelerated stalls while climbing, descending and turning, base to final turn with too much rudder and inverted stalling).

We run courses for those who own their own aircraft as well as providing our Yak 52s for hire.

Position: Head of Training and Lead Pilot of the Yakovlevs Display Team.

Jez Hopkinson FRAeS is the owner of the Yakovlevs Display Team and has lead the team for over 18 years. He bought his first Yak 52 in 1994 and with a couple of friends founded the European Yak Club, which quickly grew to include hundreds of members from all over Europe.

He first set up the Yakovlevs display team in 1998, after buying a Yak 50. He says the Yakovlevs was a natural next step to take. Jez is also an CAA/EASA Examiner and has his own aerobatic flying school since 1995 and now he is very involved with the Air Display world on a formal basis, checking show pilots competency as part of his role as a Display Authorisation Evaluator.

When he is not busy examining or running the team, he likes to spend his free time skydiving, snow skiing and scuba diving, but his real passion is actually cooking, with a glass of good wine in his hand. He has been known to dabble in Russian wine making.

Jez sits as a member of GASCo, the General Aviation Safety Council, where he is also one of their Regional Safety Officers. He lectures on aviation safety, specialising in flight safety over water and helps run Ditching and Sea Survival Seminars at the RNLI centre in Poole. In November 2014, he was bestowed the prestigious honour of a Fellowship with the Royal Aeronautical Society. 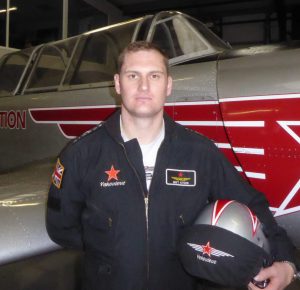 Matt Kitson is a First Officer on the Boeing 747 400 with British Airways. He is also a Class Rating Instructor CRI(A) and an Aerobatic Instructor specialising on the Yak-52 and Slingsby Firefly T67M.

Matt started his flying adventure in 2009, having previously been a Royal Marines Commando for 8 years, serving in Afghanistan. Matt is credited as being one of the youngest Royal Marine’s boxing champion at 18 years old in the super-heavy weight class. He later joined the Royal Navy as Trainee Officer Aircrew before leaving to join Ryanair as a First Officer in 2014 flying the Boeing 737-800 NG aircraft before progressing to his current job as First Officer for British Airways on their B747-400 fleet in 2016. Outside of his airline career, Matt quickly developed a passion for aerobatics, joining the British Aerobatic Association’s competition circuit competing at sportman level, before becoming an aerobatics instructor, teaching at RAF Boscombe Down on the T67M and now with the Yakovlevs Display Team and Airborne Services Limited. Matt joined the Yakovlevs Display Team in 2017 and has already deployed with them to Zhengzhou China in 2018. He flies at position 2 and 2018 will be his first year flying with the team.

Marc-Antoine (Marco) joined the Yakovlevs in 2016. He caught the flying bug at an early age, starting his training aged just 15, before undertaking his first solo soon after his 16th birthday in a Robin HR200.

Marco joined the French Air Force in 2005 and became a pilot on the Alpha Jet before progressing to become an aerobatics and formation instructor on the Grob 120-A and TB-30 Epsilon. After seven years in the French Air Force, Marc entered the civilian market, gaining his Air Transport Pilot Licence as well as a civilian instructor rating and taking up a teaching position with Roger Janin Flying Club in Paris. Leaving France, Marco then joined Flight Training London at Elstree Aerodrome.

Joining the team early in 2016, Marco has quickly demonstrated his credentials and has been busy spending his inaugural year with the team learning the various formation positions and is now fully qualified and teaches aerobatics and new members of the team formation flying.

Flight Training in Your Aircraft

We offer aerobatic, UPRT, Stall and Spin training and Yak 52 Conversions in your own aircraft for £60 an hour inc. VAT.